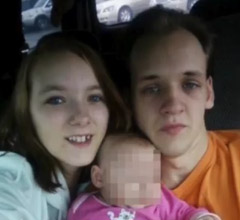 On the "Breaking Amish" season finale, Rebecca admitted that she was a mother. A picture of Rebecca and Abe with a child circulated around the internet after the show started airing.

The rumor has never been confirmed until now. Rebecca admitted, "Yeah, I do have a daughter."

At first, her ex refused to believe it was his child. Rebecca said, "She's 19 months old. I wasn't with my ex when I found out I was pregnant, but I did call him and tell him and he absolutely denied that it was his ... I was glad he denied it."

Why would she be glad he denied it?

Abe has not admitted that the child is his. As of right now, no one knows who the father of Rebecca's baby is. It is likely to be Abe's child as they were dating when she became pregnant.
Posted by Marc Anselmo at 12:27 PM