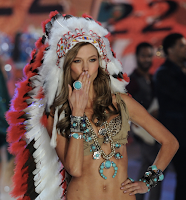 A controversial Victoria's Secret outfit has been banned for being racist to Native Americans. I don't remember seeing in the history books Native Americans wearing lingerie.

How can we be so hyper-sensitive about a woman in lingerie?

The company said in a statement on Sunday, ""We are sorry that the Native American headdress replica used in our recent fashion show has upset individuals. We sincerely apologize as we absolutely had no intention to offend anyone. Out of respect, we will not be including the outfit in any broadcast, marketing materials nor in any other way."

This is just bull crap to the highest degree. This was right around Halloween and lets face it, Native Americans in history did not wear lingerie.

Where is the moral outcry from Christians (which make up 80 percent of this nation) when the Victoria Secret "Angels" hit the stage. Angels in the bible are sacred, holy, and are God's stuarts. No one cares about the Angels because we all know it's not about insulting the Christian people, it's about women showing off sexy lingerie.

There are tons of movies, football teams with logos that feature a headdress, shows, costumes, foods, candy etc. that are about Native Americans. Why are we getting all worked up over a beautiful woman wearing a headdress?

Get the photos here
Posted by Marc Anselmo at 2:16 PM