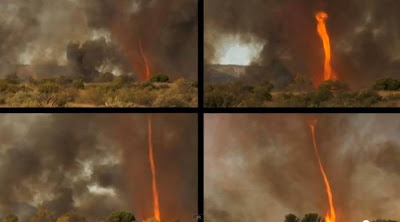 An Australian man named Chris Tangey captured a phenomenon that is called a 'fire tornado' or 'Firenado'. The proper term for the fornado is 'fire whirl'.

Tangey captured the fire tornado while he was scouting locations near Curtin Springs in Australia. Tangey owns a company called Alice Springs Film and Television.

Tangey said a small fire was burning in a nearby bushland. Tangey started filming and while he was filming a twister touched the fire. The fire traveled up the twister creating a spinning flame.
When you watch the video, turn up the volume because it sounds like a jet fighter.

The most amazing part of the story is not actually about the fire whirl. Tangey said he was contacted by Al Gore and the Climate Reality Project. They wanted to use the footage as part of a pro-man-made global warming film.

Tangey refused Al Gore while on the phone with him and when he was contaced a month later by the Climate Reality Project (which is head by Al Gore) he then rejected them.

He told Glenn Beck on his radio show today that he was skeptical of global warming, believes in it, but he does not believe in anyway this is connected to global warming. "It would be deceiving if I let it be presented this way" he told Beck.

The Blaze wrote, "The one draw Tangey may have had for giving Gore’s team the rights to the footage would have been the proceeds. He wrote to us that he’s giving 50 percent of all his news sales from the footage to the owners of the Cattle Station land, which was damaged by wildfire. To his relief, when he told them how he didn’t provide rights for use of the footage, fearing it would be put in the context of man-made climate change, the owners said he’d done the right thing."

Watch the footage below.