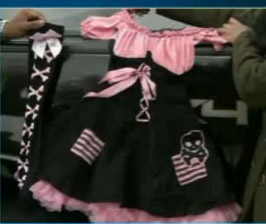 At UTICA High School, a student wore a revealing pirate costume to school. School officials told her the outfit was inappropriate and sent her to the principals office.

In the principal's office, principal Mrs. Janet Jones told her that she looked like an adult film actress. The student did not know what was that was and asked the principal what that meant. The principal then went into detail what it was. Disgusting!

The principal reportedly told the daughter that "all men watch p-rn."

The girl's father is furious with the school and principal. The father, Steve Werner, wants to know why the principal made the comments she did to her daughter.

Needless to say, the outfit is very un-pirate like. It's a shame that her parents allowed her to go to school dressed like that.

To see the video go here.
Posted by Marc Anselmo at 12:47 PM