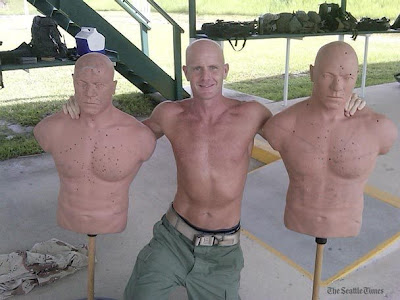 Want to see the topless photo of the FBI agent that was sent to Jill Kelley? Of course you do.

This is the shirtless FBI agent who sent the photo to the alleged mistress of Gen. David Petraeus.

The photo is not scandalous. The photo was published of The Seattle Times. When he sent it out, he apparently told her the photo was taken after a "hard workout" with the SWAT team at MacDill Air Force Base.

Frederick Humphries put a caption under a photo that said, "Which One’s Fred?"

The FBI is upset over the photo. They are investigating Humphries relationship with Kelley.