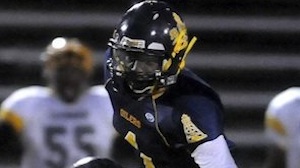 A Michigan high school football team is going to have to forfeit two games after it was discovered that they had a 21-year-old man playing on their team.

According to reports, Javier Jones was using a fake birth certificate and fake transcripts to enroll into Mount Pleasant High School. When he enrolled he joined the football team for the school.
Javier Jones is not his real name. His real name is James Nash.

The plot was discovered by an anonymous parent. The Morning Sun reported, "I received an anonymous tip from a parent, it was an adult that had a conscience, that said you better check this,' Mt. Pleasant High School athletic director Jim Conway said Friday. 'So earlier this week we dug up his file, the police became involved (and) all the school officials, and found documents had been altered and forged. There was a couple days of investigation, looking into that and what we have found is this individual is not the individual that was on the transcript. What we found is he exceeds (the age requirement). You can't be 19 prior to September 1 to be eligible. He was older than 19 on September 1. The student has been removed from Mt. Pleasant Public Schools.'"

HLN reported that the team will likely have to forfeit two victories because of the incident.
Posted by Marc Anselmo at 12:15 PM