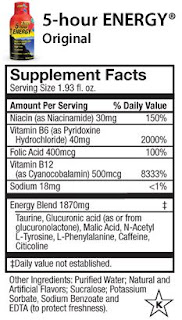 13 people have reportedly died while using 5-Hour Energy. It did not name the product as the cause of death however the product was taken by the person who died.

The New York Times reported, "Since 2009, 5-Hour Energy has been mentioned in some 90 filings with the F.D.A., including more than 30 that involved serious or life-threatening injuries like heart attacks, convulsions and, in one case, a spontaneous abortion, a summary of F.D.A. records reviewed by The New York Times showed."

5-Hour Energy distributor, Living Essentials of Farmington Hills, Mich., has yet to respond to questions about the filings. Today, a top executive declined to be interviewed.

Recently, 5 Hour energy teamed up with The Avon Foundation for Women Breast Cancer to help raise awareness. The awareness is good, but maybe they should make women aware on the label that some have had spontaneous abortions from the product.

5-Hour Energy does not disclose how much caffeine is in the product.

5-Hour Energy contains ingredients such as high levels of certain B vitamins and taurine.

Will you continue to drink 5-Hour Energy?