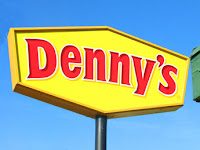 Let me give you some perspective on why this isn't a Grand Slam for Obama. Denny's is going to be charging a new 5% percent Obamacare surcharge to customers.

The Affordable Care Act or as some like to call it, Obamacare, is like an economy tax. Tens of thousands are being laid off and having their hours cut due to the new universal health care initiative.

READ MORE:
How Many Businesses Have Announced Closings or Layoffs Since Obama Won A Second Term?

The Daily Mail reported, "Florida based restaurant boss John Metz, who runs approximately 40 Denny's and owns the Hurricane Grill & Wings franchise has decided to offset that by adding a five percent surcharge to customers' bills and will reduce his employees' hours."

Employees who work at restaurants such as waiters, waitresses, managers, and busboys desperately need those hours due to the fact that these places of business do not pay well as it is. Denny's isn't exactly known as a fancy restaurant. Tippers might give even less due to Obamacare surcharge. A 5 percent on a $100 meal is an extra $5.

Metz said that he will be taking people who have 40 hours a week and giving them 28. This will force employees at Denny's to get a second job. In an economy with 7.9 percent unemployment, there is already a lot of competition as it is.

The future is looking grim.
Posted by Marc Anselmo at 4:03 PM