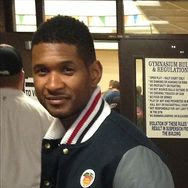 The singer known as Usher angered voters in the Atlanta area after he contacted election officials to allow him to bypass long lines and cast his ballot. Usher Raymond IV was escorted past a huge line at the Roswell polling place in Fulton county causing people in line to "jeer" and "boo" him.

The Roswell polling place said they tried to make it go by as quickly as possible however new details prove that wasn't the case. Usher was taking cellphone pictures of himself voting and then posted them on Twitter.

You can't go as "quickly as possible" if your too busy taking photos and posting them to Twitter.

In most cases, Georgia law states it's illegal to take a video inside a polling place unless the poll manager says it's okay. Usher was given this special permission while others in line were not.

Many are upset that Usher didn't vote absentee. Apparently, he would rather show up and act like a "prince" then a citizen of the United States of America.
Posted by Marc Anselmo at 10:48 AM