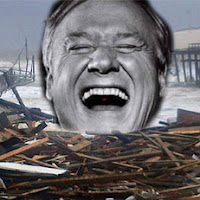 Chris Matthews has thanked and endorsed the 'murder and destruction' of Hurricane Sandy because he believes it helped Obama's get reelected.

MSNBC commentator Chris Matthews is facing backlash from conservative groups after saying that he was "glad" that Hurricane Sandy hit the east coast. Matthews claims that the hurricane helped propel Barack Obama into a second term as president.

Here is what Matthews said:

"I am so proud of the country. To reelect this president and overcoming -- not because of the partisanship or even the policies. Here's an African-American guy with an unusual background -- part immigrant background, part African-American background -- with all this assault on him from day one. From Mitch McConnell, from the clowns out there that will never be elected, never will be to anything."

"And the way he took it, as someone said, with coolness and charm and dignity and took it and took it and kept moving forward and doing his job. And the American people, and I know we look at these percentage, 40% of white vote. Fine. That's about right among Democrats in the last couple cycles, three cycles or four. Good work for them. Good work for him. A good day for America."

I'm so glad we had that storm last week because I think the storm was one of those things. No, politically I should say. Not in terms of hurting people. The storm brought in possibilities for good politics."

Chris Matthews should be ashamed of himself for being thankful for a hurricane making results allegedly go "his way" in an election. This is beyond politics, it's a tragedy and it breaks the hearts of millions of suffering Americans.