Email ThisBlogThis!Share to TwitterShare to FacebookShare to Pinterest
People are freaking out over how "The Hobbit: An Unexpected Journey" has been shot at double the high frame rate. It looks weird, it looks "hyper-realistic", and it looks like a TV soap opera. HFR technology will likely turn off movie theater viewers.

Call me old fashion, but when I watch movies and TV shows I turn off the "smooth motion/real cinema" mode. It's too real and it loses that magic feel of movies that I've grown up on for most of my life.

EXPLANATION: Soap operas are shot on *videotape* at 60 frames per second, rather than film which is 24 frames per second.  Film is expensive, which is why the low frame rate, it's the lowest that was considered practical for smoothish motion + sound.  Video is faster but cheaper.  The interpolation basically makes the film look more like video. "The Hobbit" is filmed at 48 frames. 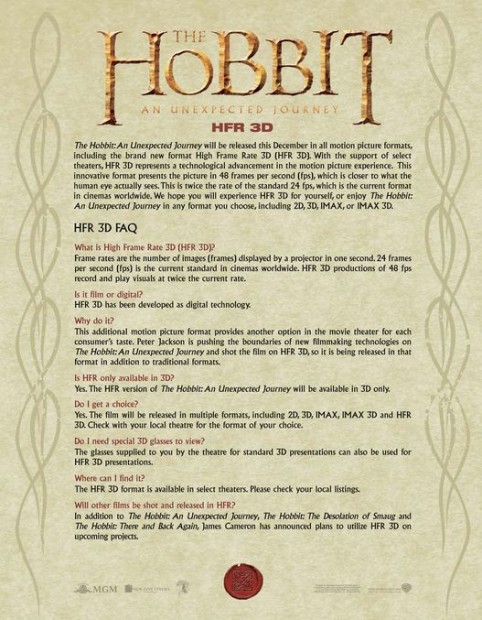 The HFR 3D version of the film will require the traditional 3D movie glasses.

So far, the format has garnered negative reviews after it was shown at the CinemaCon convention in APril. Director Peter Jackson however refuses to change the format. He said, "It does take you a while to get used to."

Fans of the 24-frames per second format will still get to see the movie at that rate. Non-3D versions of the film will be shown at that rate.

It looks like the traditional 24-fps format is going the way of the dinosaur as more and more directors want the high-tech format of HFR.