Donald Trump Calls For "Revolution" After Obama Election On Twitter

Email ThisBlogThis!Share to TwitterShare to FacebookShare to Pinterest
TV personality and Business mogul Donald Trump is calling for a "revolution" after President Barack Obama won re-election last night. But then, he deleted his tweets. 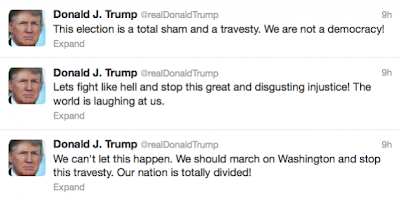 I'd like to note that Trump deleted his tweets calling for revolution after Obama ended up winning the popular vote by over 2 million people.

Trump tweeted that he hopes the House of Representatives keeps Obama in check.

It should be noted that Obama was caught on camera telling Russian President Dmitry Medvedev that he expects to have "more flexibility" after his re-election. I doubt the House of Representatives will be able to stop Obama this term.
Posted by Marc Anselmo at 11:59 AM