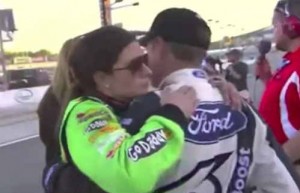 Was it another man? We might just have a clue as to why Danica Patrick is getting a divorce.

NASCAR driver Danica Patrick is praised by most men for her goddess like looks and incredible driving abilities. Patrick always felt unattainable by fans, that changes today as adorers will be lining up for her autograph more than ever before. But with Patrick now getting a divorce, her popularity is going to skyrocket.

Danica Patrick is divorcing Paul Hospenthal after 7-years of marriage. Patrick is 16-years younger than her estranged husband Hospenthal.

Patrick wrote on Facebook: "I am sad to inform my fans that after seven years, Paul and I have decided amicably end our marriage. This isn't easy for either of us, but mutually it has come to this. He has been an important person and friend in my life and that's how we will remain moving forward."

FOX NEWS reported, "Hospenthal is a physical therapist who met Patrick while treating her for a non-racing injury. The two were married in 2005..."

But what was it that pushed their marriage to the point of no return? According to reports Danica has quickly formed a friendship with NASCAR rookie Ricky Stenhouse, who is just 24-years-old, in the past year. They are in constant contact as they both work the same job. Stenhouse has been accused of going easy on Danica on the race track several times by fans.

Here is a video of them hugging. And it's super awkward.

Is it possible that she grew tired of playing doctor with Hospenthal, who she was much younger than, in favor of some work place love with someone more her age? ﻿
Posted by Marc Anselmo at 7:37 AM