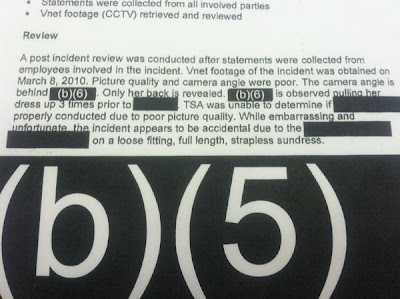 The Transportation Security Administration (TSA) has reportedly exposed the breasts of US Rep. Ralph Hall (R-TX) 17-year-old niece during a pat down at the LAX airport. Instead of apologizing, the TSA has blamed the girl's "loose fitting' dress.

Rep. Hall says the TSA agent who exposed his niece's chest should be fired. The TSA however refuses to fire the agent claiming it was an "accident". The accident occured in front of the girl's Christian youth group.

There is surveillance footage of the incident. How horrific is that? Not only did everyone near her saw, but everyone watching security footage saw nudity too.

Accident or not, this is what happens when you have security measures that are overtly intrusive of an American's individual rights.

The TSA report said this: "during patdown of stomach area, sundress slipped down to her stomach, revealing her br--sts."

The agent involved has apologized but still has not been fired. He has reportedly been "counseled on professionalism".

This event happened 2 years ago. It was released today due to the Freedom of Info Act.

Read the full story and get the video at Twitchy
Posted by Marc Anselmo at 12:52 PM